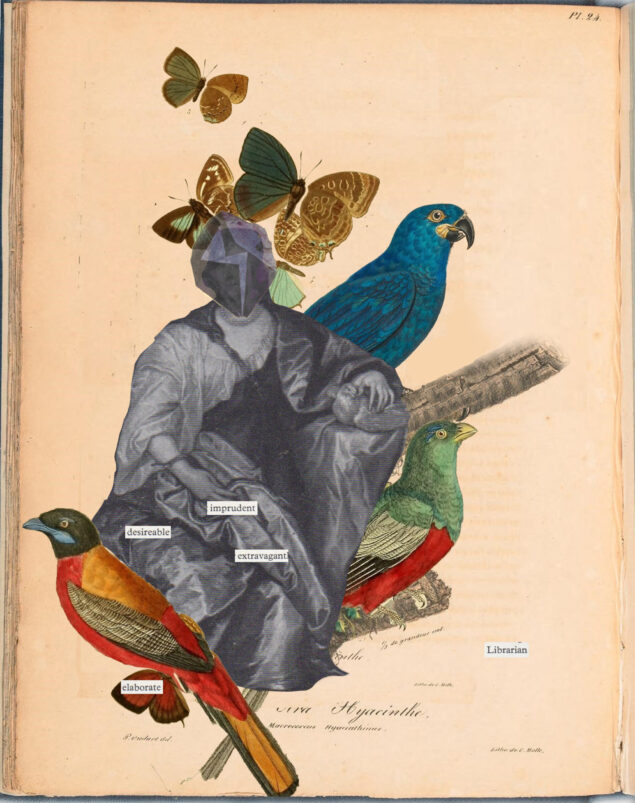 I’ve just spent a week making erasure poems, and started to think about what these are to me and what the form might mean.

What are Erasure Poems?

For those who are new to erasure poems there’s a great article here from Erin Dorney (on Trish Hopkinson’s website). The article talks you through different examples of the form. There’s also an interesting recent article from The Guardian on erasure poems as political commentary.

I’ve been working with found poems and collage/visual poems for a while now, and started experimenting with erasures last Summer. My aim has been usually to subvert, working in the surrealist (collage) tradition. But it’s only when I began to use the same source for both image and text that I think I’m starting to understand the form a bit more.

Using images and text from the same source

For this series, I’ve used an old Tate Gallery Catalogue – The Age of Charles I. I’ve taken images from the book and erased the accompanying text. I wanted to ‘keep’ the pure formal constraints. Therefore, I haven’t let myself have any wiggle room in moving the words around – if the text was placed behind them then you’d see the words in situ.

I’ve used La Galerie des Oiseaux as a secondary source – beyond extending the page margins, I haven’t touched this much. But I wanted to give the sense of this being a surreal reference book.

What I found in the catalogue was that the explanation of each image was male-dominated and rather scanty, which reflects it being written in the early 1970’s.  In terms of the female portraits, these were largely defined by who they married or the amount of babies they had. The text was a cipher. When I researched some of the women in the images this showed that many had dynamic and startling lives. I tried to bring this into the erased text where I could.

But, more often, the erased text ended up as surreal as the collages themselves. I think where the form works is when this juxtaposition of word-image and text-image creates a kind of dissonance, hinting at a story from a very in-between space. A space of impossible (and of potential). As a stand-alone, the collages and erasures aren’t that exciting, but, hopefully, together they create an interesting tension and work in the surrealist and erasure tradition to subvert the text, make a new space.