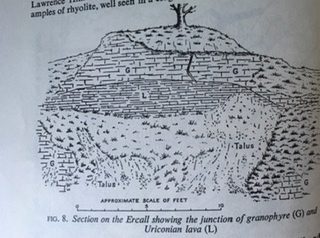 I was often fortunate in interesting some intelligent member of the peasant-class
in my work (Georgina Jackson, The Shropshire word book)

It’s 1916. Her father’s dead from Spanish flu.
She tells the geologist stories.
How Gwendol Wrekin ap Shenkin ap Mynyddmawr
Gwendol Wrekin, son of Shenkin, grandson of Big Mountain
walked twenty leagues from the dark and basic
Mynyddoedd Duon towards the silurian strata;
the flat plains. To dam the river Severn.
To flood the bastard English.

She points to the earth scraped
from Wrekin’s boots. High Arcall, Ercall Hill –
rock that consists mainly of a rather coarse
crystalline intergrowth of quartz and feldspar.